Apparently one of the unforeseen functions of my blog is to document the decline in my vision over the decade of my forties. I have written about it here and here. Despite my attempts to be philosophical about it, I still find it annoying (at best) and unsettling (at worst) that I can’t see as well as I used to. Fortunately, magnification technologies come to my rescue at opportune moments. So honestly I cannot complain. Here’s a great example of such a rescue.

I’ve been stripping the seed bolls off of my flax from last summer, and sifting through debris for individual seeds. Flax seeds are shiny and glossy, and they stand out amidst the beautiful but comparatively lusterless dried leaves, flowers, and other bits of plant debris. Well, they stand out a *bit*. They do not stand out a *lot*. The chaff and other debris are highly textured and multicolored, and even glossy, shiny seeds can get lost in the mix. Especially with my not-so-awesome eyesight. The other day I was stripping the seeds off of the variety called Ariane. I’d removed all the seed bolls from the plants. Yay. However, I had a huge pile of debris to sift through with loose seeds mixed in. Sigh. Time to double down.

The time-honored way to separate seeds from chaff is winnowing. I am not good at winnowing. Seeds and debris seem to sail away with equal abandon. In fact, I wrote about the problem of winnowing weld seeds in my first post. I am sure I could improve with practice and guidance. Flax seeds would no doubt be more sensible than weld seeds to practice my winnowing skills on, since they are not as mind-bogglingly teensy. However, until I actually become good at it, I do not want to waste my hard-won seeds from the flax plants that actually managed to survive and thrive last summer.

N.B. As a step down from winnowing, I sometimes crush several bolls in my hand and then blow gently across my cupped palm to blow the debris away. This works pretty well, and I can modulate the strength of my breath much more precisely than a fan or the wind. However, it means a lot of exhaling and controlled breathing, which can get tiresome.

Meanwhile, I developed a system of moving a small quantity of the debris in front of me with a kitchen knife and scooping up the seeds with a spoon. I scraped a thin layer of debris across the row cover, not too thick to see through. I was wearing my reading glasses, so the magnification was hands-free. However, it was insufficient. It was slow going. Then came the brilliant thought! Well, it was more like a useful memory.

Actually, I can’t retrace the exact thought pattern that sparked the memory, but at some point I recalled that Matthew’s mom had bestowed upon us a lighted magnification lens such as one might use for embroidery or other fine crafts. I knew exactly where it was in the otherwise chaotic crafts room upstairs. I ran upstairs, grabbed it, took it out of the box, put in a lightbulb, and noodled around trying to get the lens set up in an effective position. Fantastic! Once I could spread the debris under the lens at the correct angle, I could see the seeds clear as day. The knife and spoon looked humongous! Triumph! 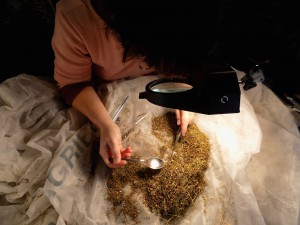 View from my perspective: 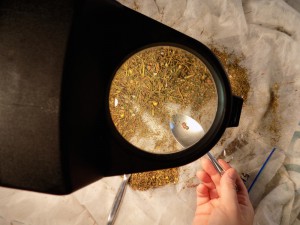