Let me just start this post by acknowledging that I might be jinxing myself by writing it. But here goes anyway.

At the end of June I harvested woad seeds. I already have way more woad seeds than any sensible person needs. They are so beautiful I just like to watch them mature, so now I have even more. 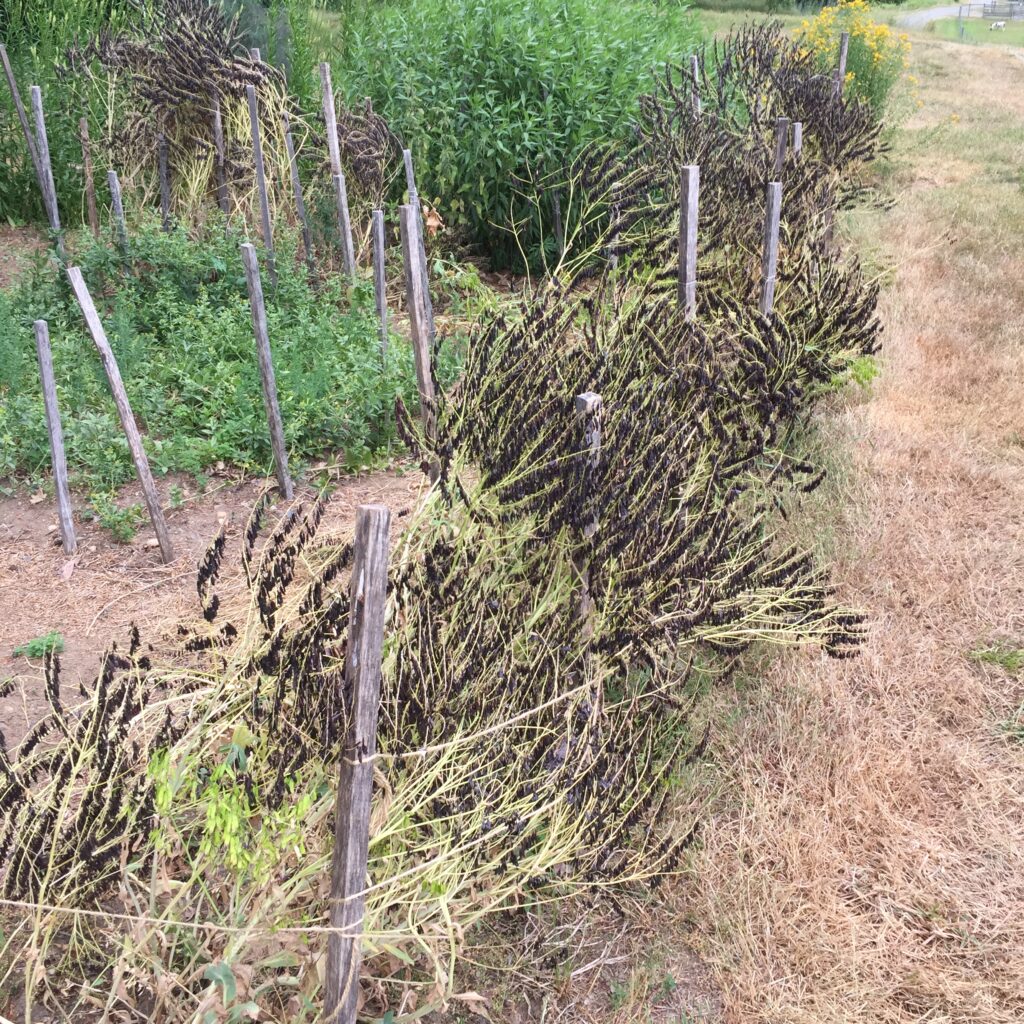 A couple days after that, I dug over the bed, added compost, and planted more woad. In the same bed. Yes, I do know better than that, but I did it anyway. I hadn’t done a good job of planning out the location and rotation of the various beds this year, and all the other beds were full of other things. Even in a small garden, rotating beds is important. Crop rotation helps to keep the soil nutrients from getting depleted (because different plants have different nutrient demands) and helps to interrupt disease and pest cycles.

So, my first mistake was to plant woad, a nitrogen guzzling brassica with a host of possible diseases and pests, in the same bed two years in a row. I thought the compost would help with the nutrient issue, and hoped for the best.

The best did not occur. I got excellent germination, then the seedlings just disappeared overnight. Poof! Alien abduction! Or fairies. I replanted several times. Same problem. Having made my “bed” so to speak, I now had to figure out how to make the best of a bad situation.

We had an extended dry spell in the spring and early summer, then in July we had some very hot weather. I thought the seedlings were drying out in between waterings. So, on July 18th I rigged up a little shade canopy with heavy-weight row cover. 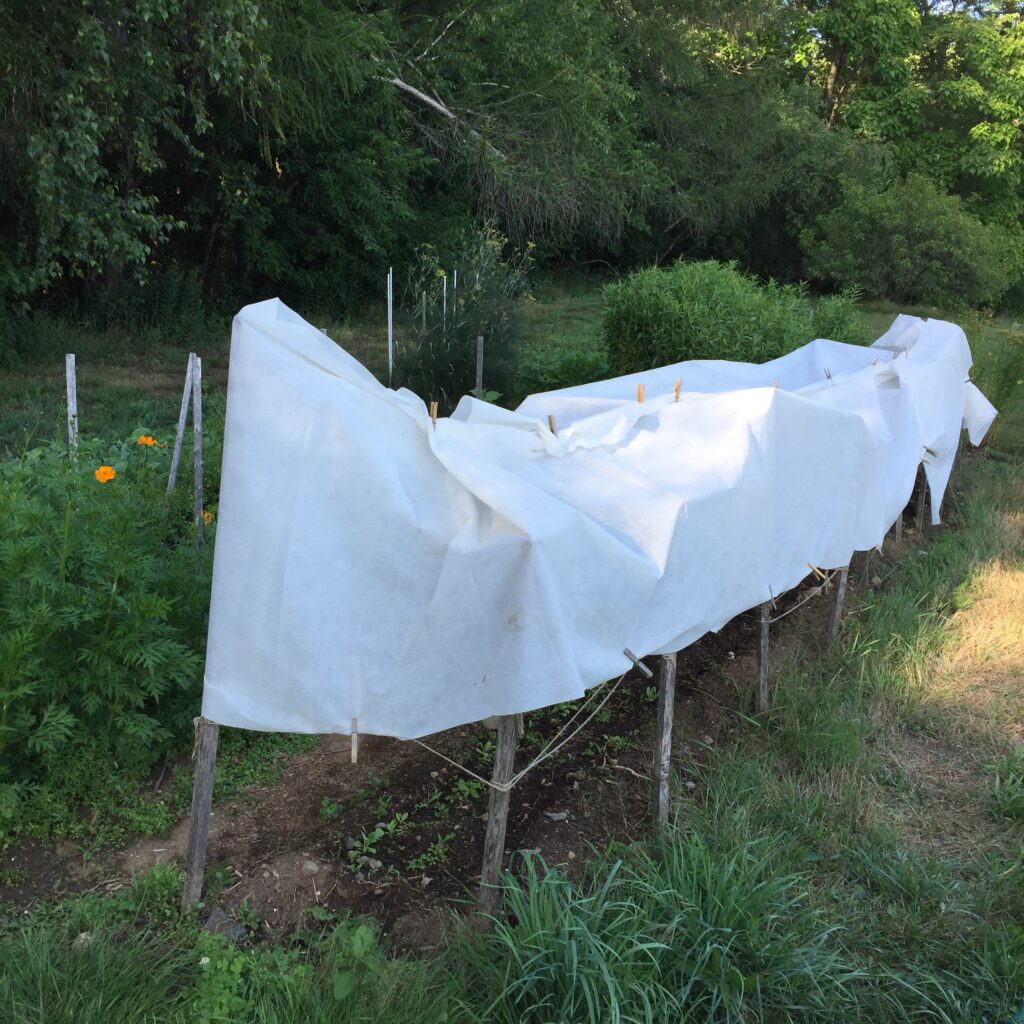 I left the bottom open for air circulation and easy watering access. I increased my watering schedule from once a day to twice a day, morning and evening.

This did not solve the problem. Someone on my Instagram account commented that critters might be eating the seedlings. There are many, many rabbits this year, and they certainly might like a little nibble of tasty woad. OK, I do not actually know if it’s tasty, I have never tried it. But it’s a brassica, so it’s probably yummy to a bunny. Woad microgreens, even. A delicacy.

I moved the thicker row cover down to make a “fence” around the bed, and used clothes pegs to cover the top with lighter-weight row cover for shade. I continued with the twice-daily watering. 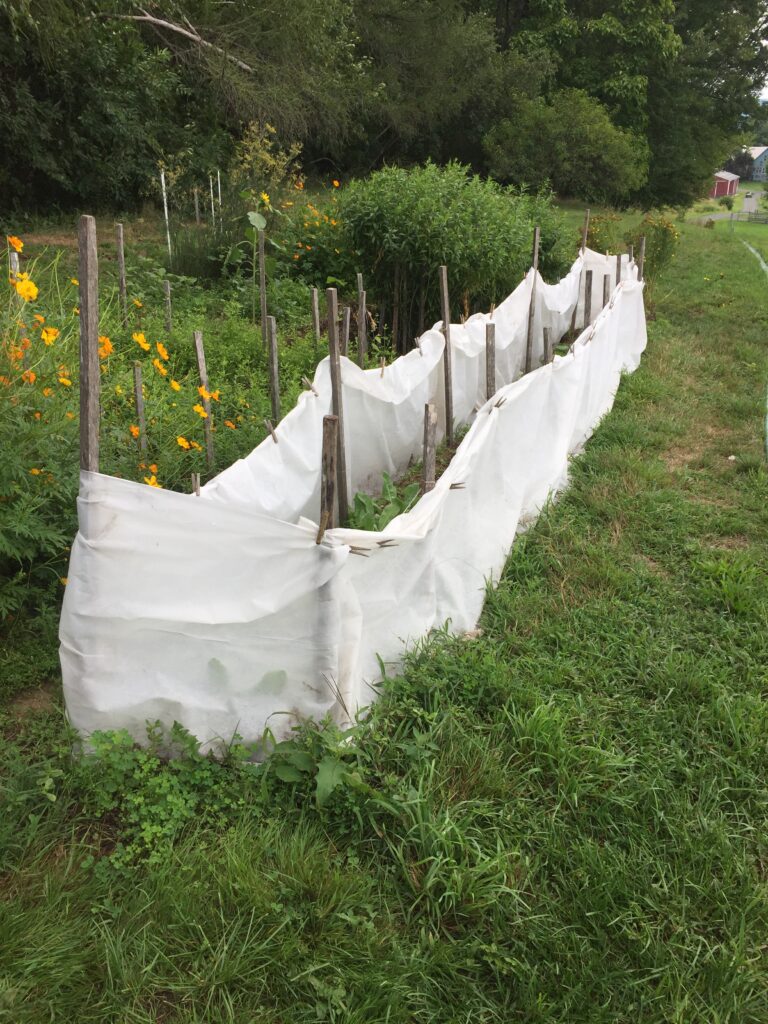 You’ll just have to imagine the row cover on top because for some reason I never took a photo of it.

This strategy did not help either. Successive re-plantings were still dying off.

One disease I have encountered before with woad is club root, so I pulled up a few plants to see what the roots looked like. 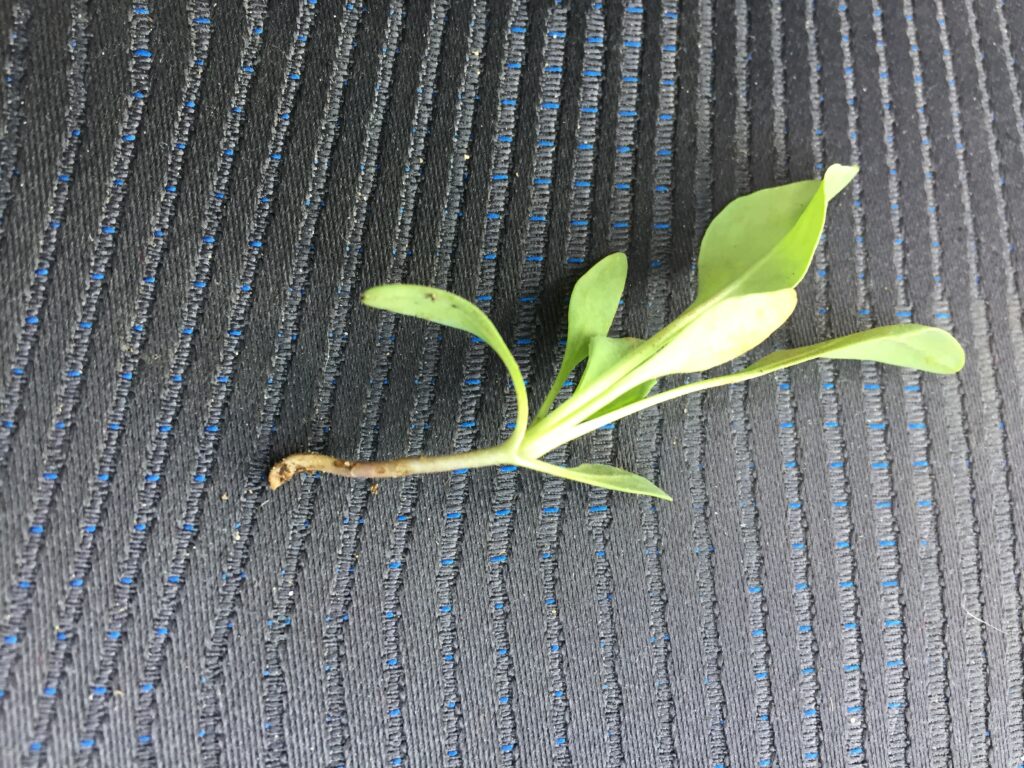 Nothing too weird-looking there. So, probably not club root.

On August 3rd I was able to see the dying seedlings in the process of their demise. Here are some images of their sorry state:

Finally, I consulted the farmer who manages Bramble Hill Farm, Hans Leo. He suggested damping off, which is caused by a variety of molds and fungi in the soil.

Well, damping off made a lot of sense. I had inadvertently worsened the situation by making a hot, humid tent in which there was no air circulation. Recommendations for avoiding damping-off include allowing the soil to dry off between waterings, and having plenty of airflow.

Hans recommended spraying with chamomile tea to help the plants fight off the pathogen while they were small. Once plants get bigger, they are more resilient.

In fact, the few plants that had survived the seedling stage were doing great. You can see some big, healthy woad plants in the otherwise empty bed: 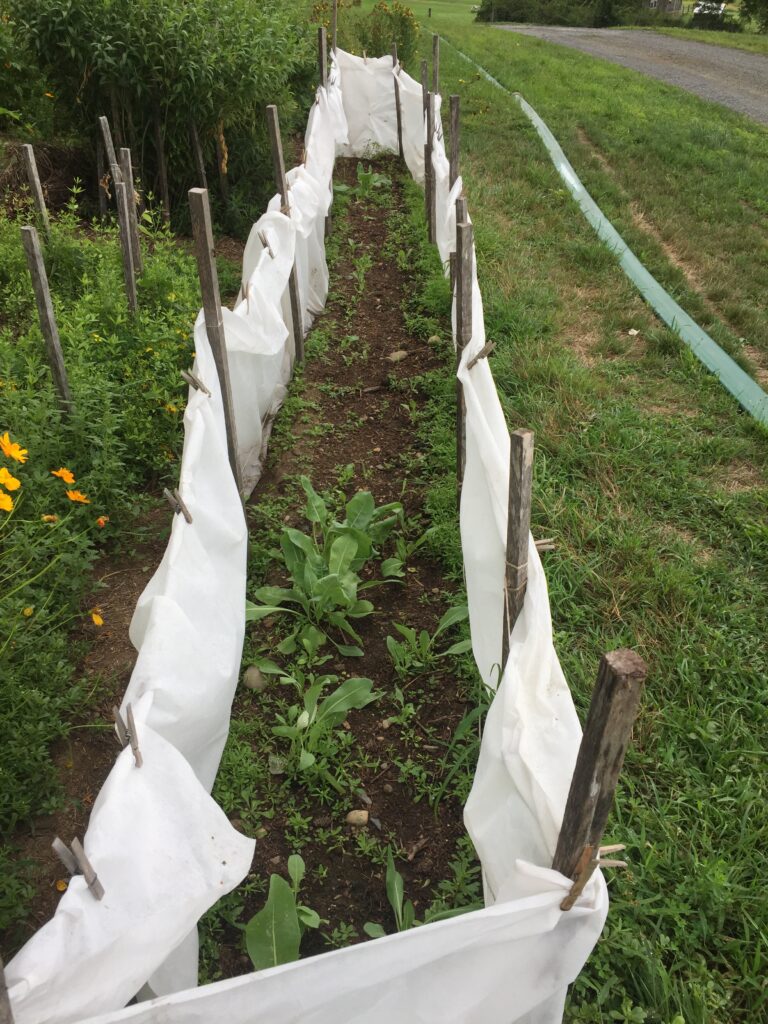 So, I brewed up some chamomile tea. Several years ago I was gifted a box of fancy dried chamomile, but hadn’t made much of a dent in it. Clearly this was its intended purpose! 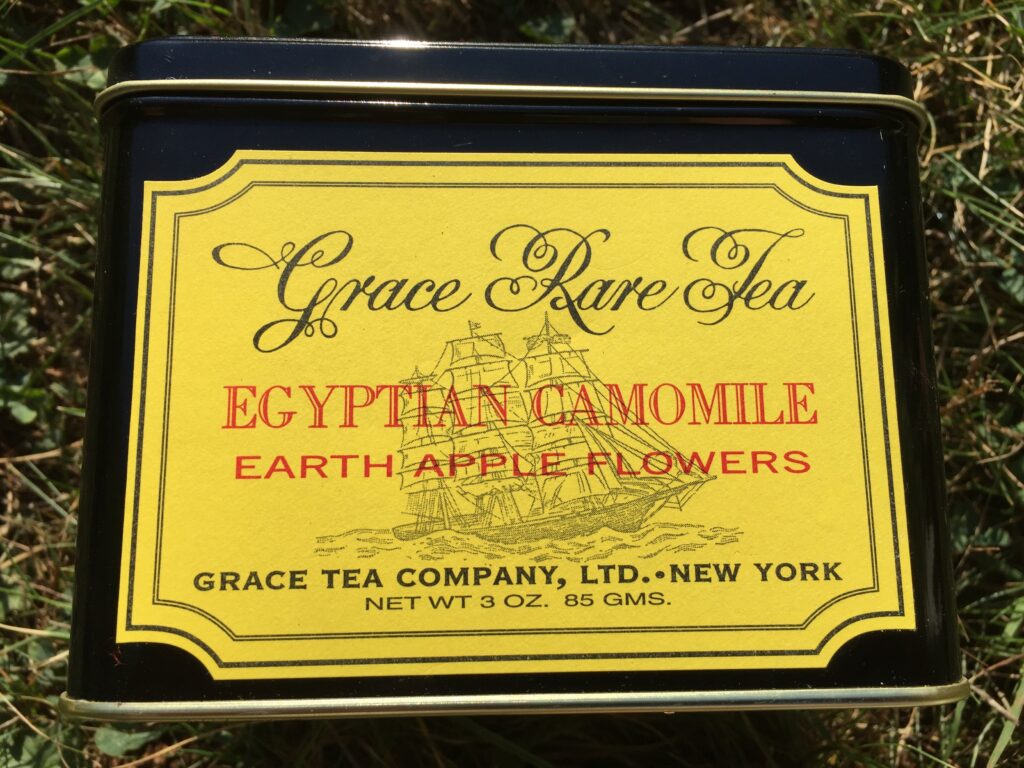 I got a spray bottle. 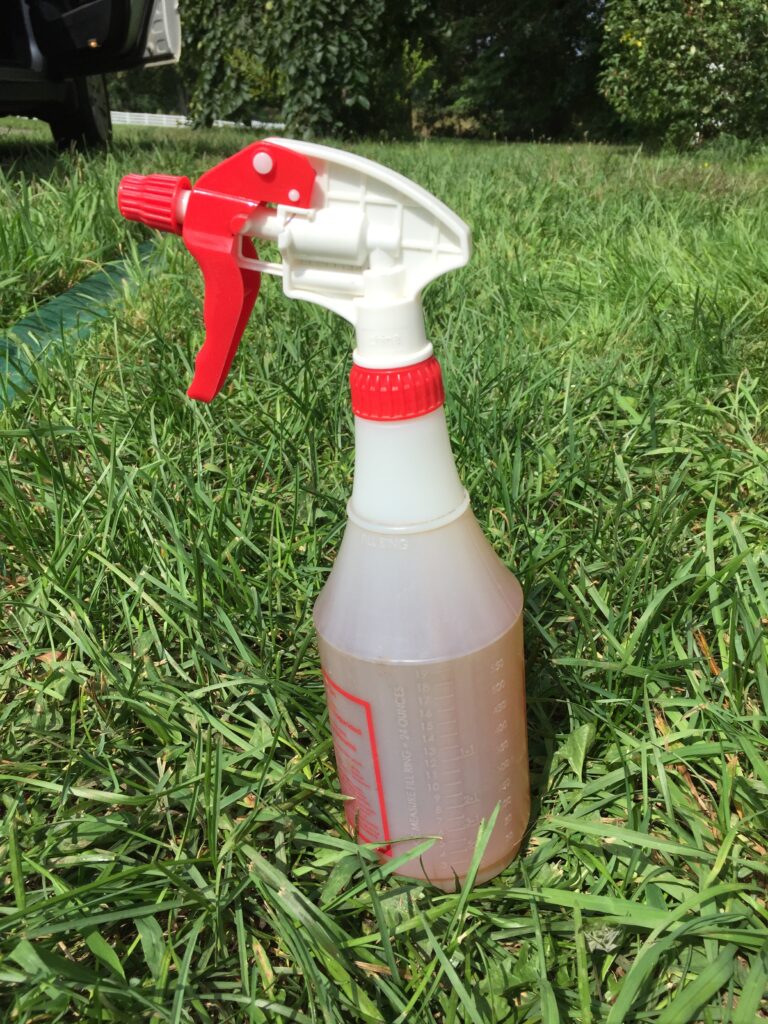 I took off all the row cover. Here’s the newly unwrapped bed on August 9th: 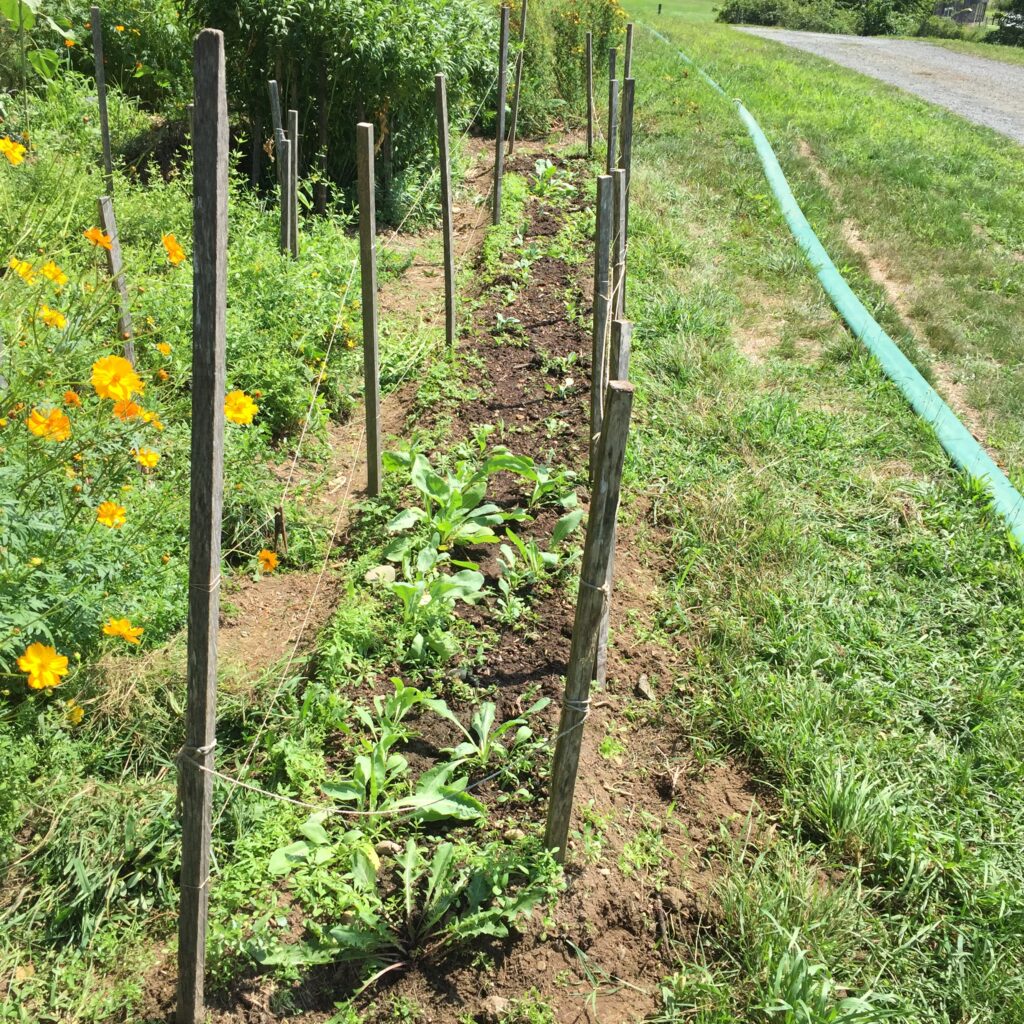 I started spraying the seedlings every morning after I watered, and reduced the watering to once a day. I replanted once again. Here are some seedlings emerging on August 12th:

And here they are, not dead yet, on August 14th! 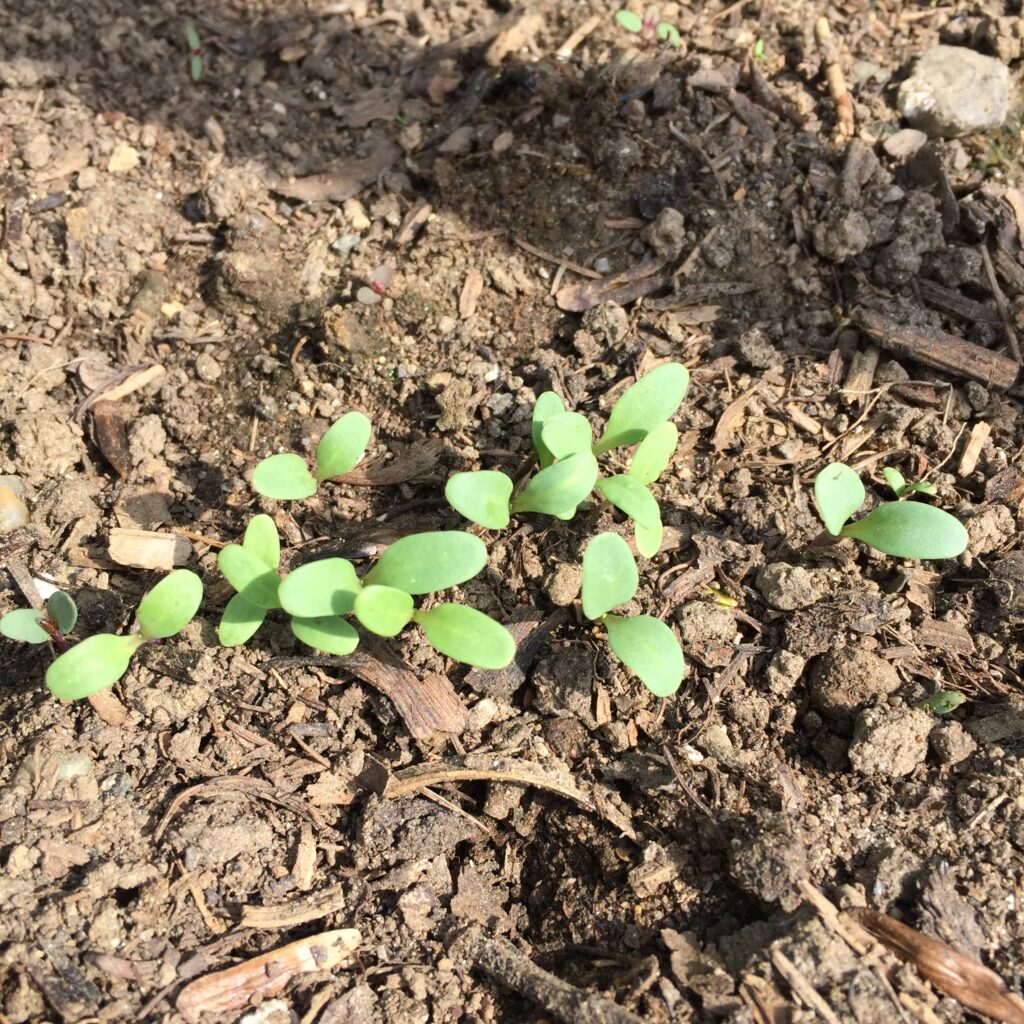 I am cautiously optimistic that the woad will actually grow to maturity!