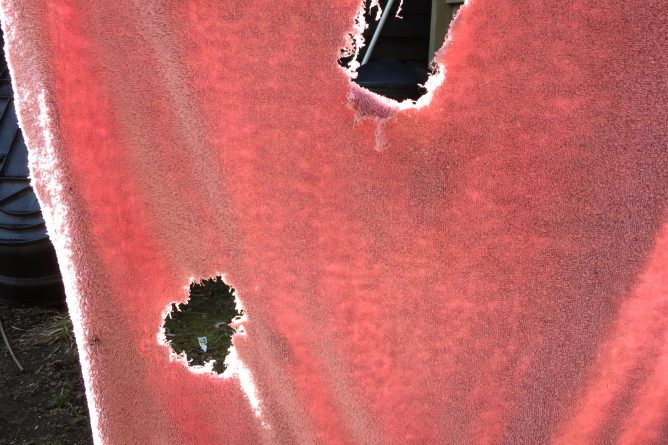 If you give a mouse a towel, it will chew it up and make a nest. Then it will eat your flax seeds. Here’s how it happened.

Last year I grew a flax type called Suzanne. I’d never grown it before, and I planted too densely. It came up very crowded and the stalks were incredibly thin. That’s not necessarily a bad thing for fiber flax, but it wasn’t my plan and there were some negative side effects, such as lodging due to spindliness and early death of many stalks due to nutrient and water deficiency.

I harvested what seemed useful, and dried it and stored it. I will have to document the harvest in another blog post. All winter the flax lived in the back of the car, wrapped up nice and snug. It’s a relatively safe and out-of-the way place, until March rolls around and you want to collect 12 fleeces from Peggy Hart for a Western Massachusetts Fibershed project. Then the back of the car is no longer out-of-the-way. It’s prime real estate.

So, I moved the flax into the shed, despite the fact that it was still full of seed heads that I hadn’t removed. I told myself it would be OK, it was only temporary. I’d be skirting those fleeces in no time, and then the seedy flax would return to the relative safety of the car. No problem.

This was in March. Then, boom, COVID-19. School and everything closed. Time got all wonky. I was suddenly trying to teach 1st and 2nd grade via the internet. Skirting fleeces was not a thing.

Fast forward to April 12th. I went in the shed to get something else, and noticed suspicious mouse-eaten flax seed debris and mouse poop on top of the wrapped-up Suzanne from 2019. Yikes.

So I yanked it out without any photo-documentation of the mess. A verse of a song popped into my head that I’d written for myself years ago (I am not a song-writer) as a personal I-told-you-so.

My usual flax-seed removal method is what I have dubbed the wine bottle or beer bottle method. It works equally well with any large glass jar or bottle. I got to work immediately, despite the dwindling light of the afternoon. I spread out a sheet on the front walk. 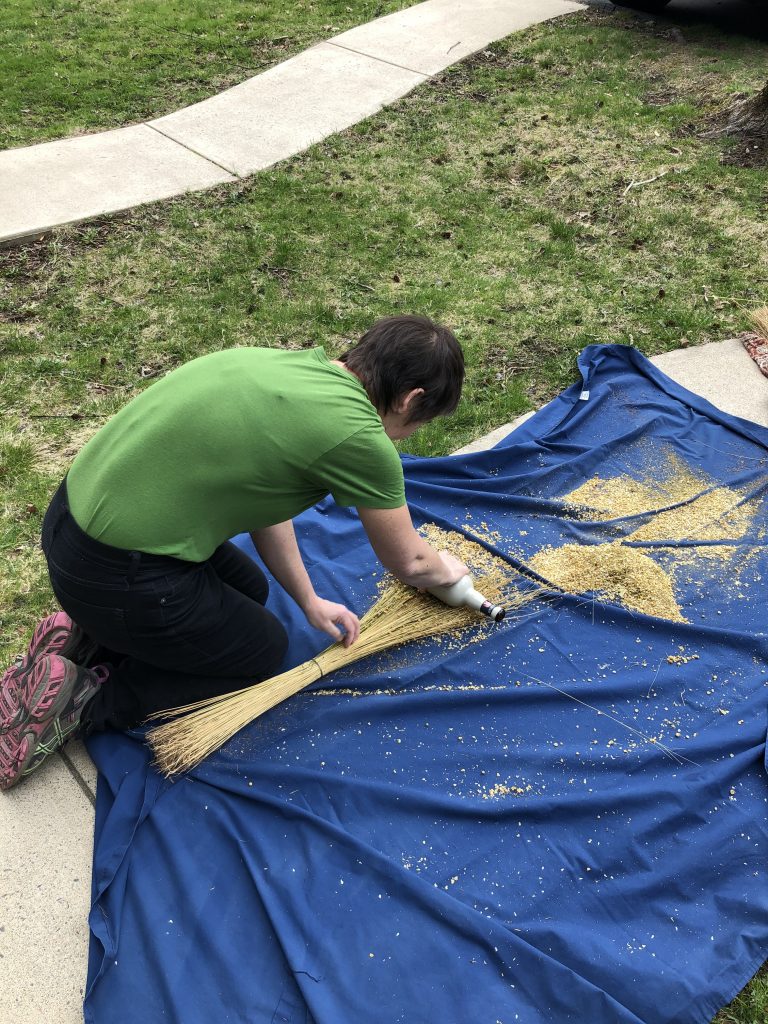 When I do this step, I keep the bundles tied together but splay out the tops so I can crush all the seed bolls by rolling and pressing with the bottle. 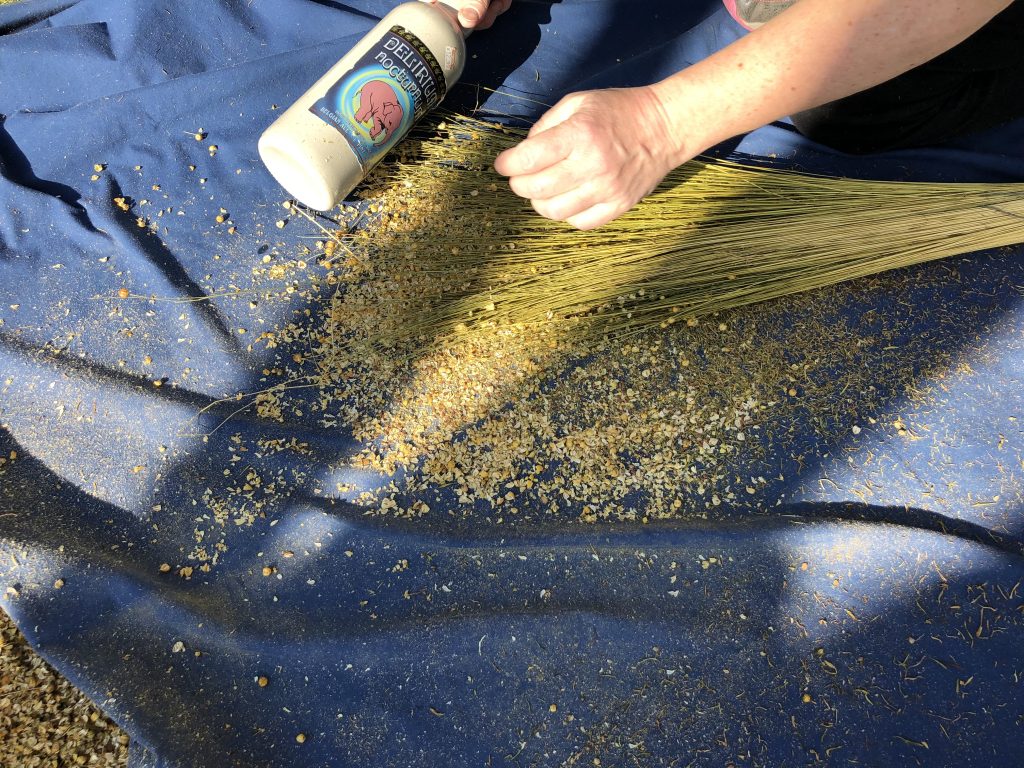 There was a lot more mature-looking seed than I’d expected. So, I was happy to be finally getting around to removing the seeds (traditionally called rippling), even though the timing wasn’t ideal. 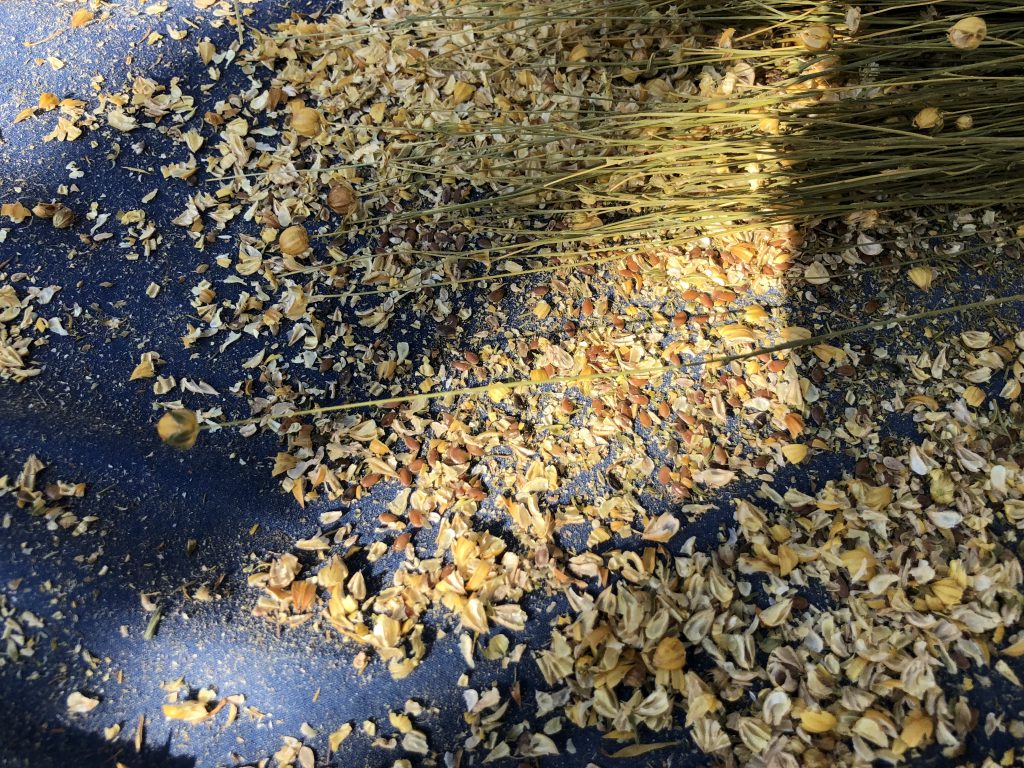 I managed to get the seed bolls off about one third of the crop before the wind picked up and started whipping the sheet around and tossing all the seeds, etc. onto the lawn. Time to stop. 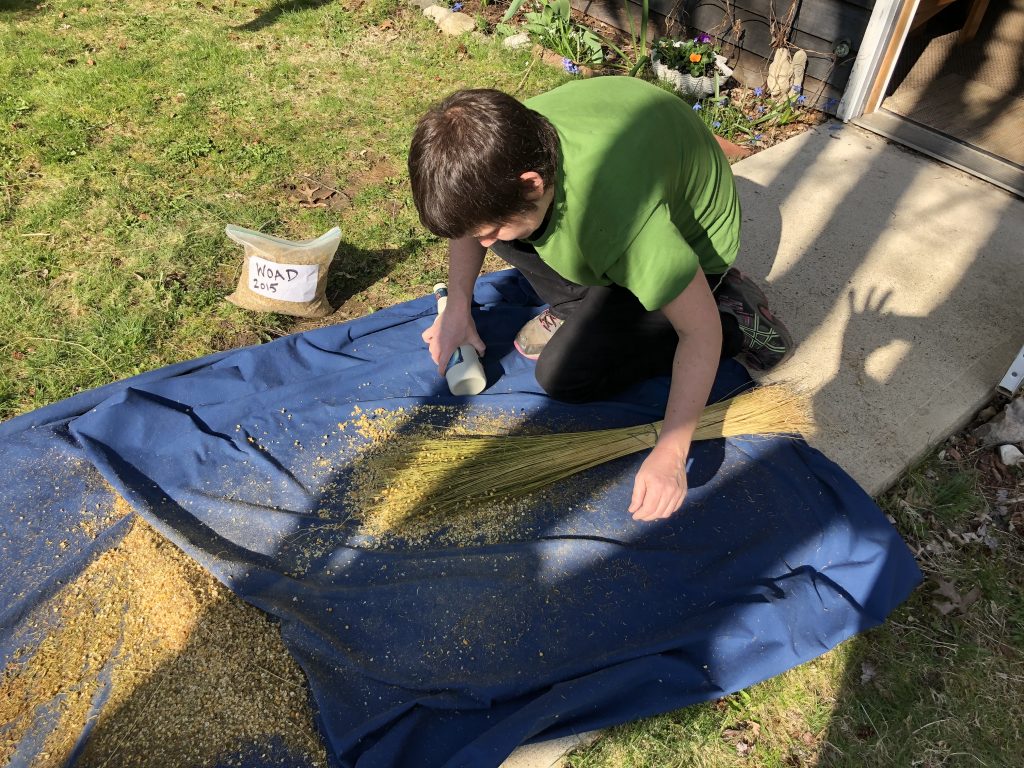 The bag next to me that says “Woad 2015” is actually full of flax seeds and chaff now, and will need to be winnowed eventually.

I was too busy to do any more work on either the flax or the fleeces until April vacation finally arrived. I set up an indoor space to skirt fleeces at my school, and spread out a big tarp on the ground to keep the floor clean. The tarp had been stored in the shed, rolled up neatly. The shed same shed that contained the towel and the mouse.

The pink stuff is from the towel. The jute is from twine. I’m not sure what the white material is, but it’s probably row cover. It looks very soft and warm indeed. Here is a close-up. 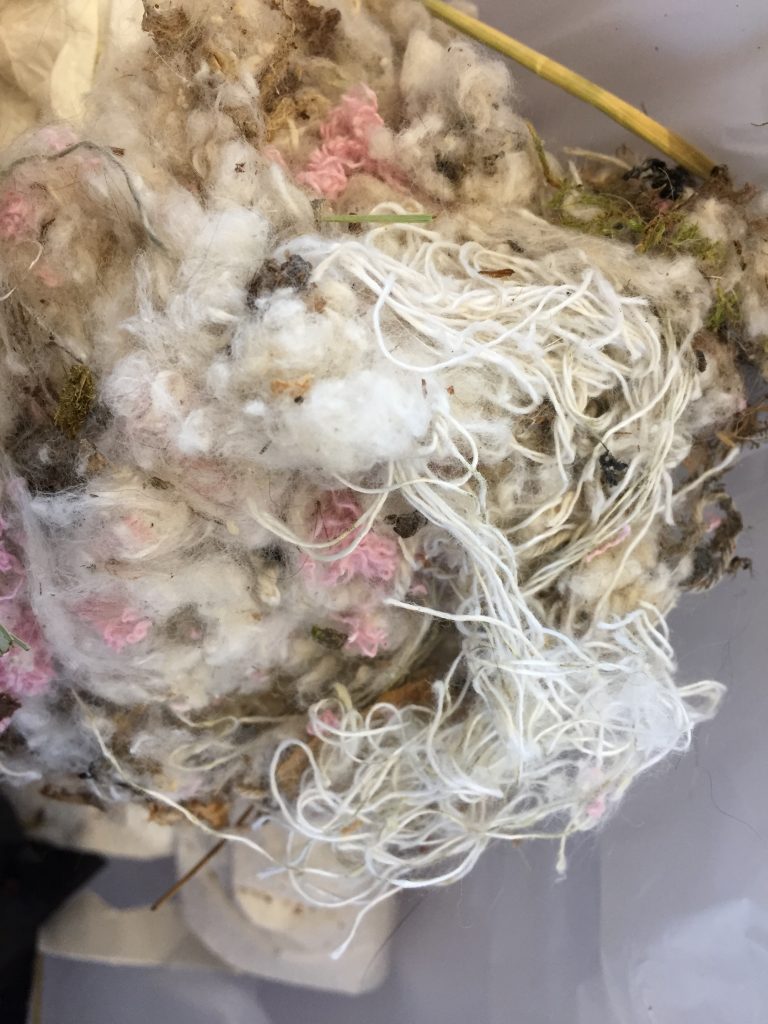 What an industrious and resourceful mouse.